Hemospermia has been considered as a benign and self-limiting condition. It usually has an inflammatory or infectious cause. However, recurrent or persistent hemospermia may indicate a more serious underlying pathology, especially over 40 years of age.

Biopsy or surgical excision is indicated in cases of suspicious findings during investigation, such as cysts or masses. Open surgery has been considered the definitive form of treatment, however, it can be associated with significant morbidity. With growing experience in laparoscopics, this approach is becoming the preferable way to access the seminal vesicles.

Our objective is to demonstrate a step-by-step operative technique for laparoscopic unilateral vesiculectomy approach in a man with hemospermia.

Case: A 61 year-old man presented with 1 year of hemospermia. He was treated empirically with a fluoroquinolone plus a nonsteroidal anti-inflammatory without resolution of symptoms. Ultrasonography and MRI showed a solid-cystic mass in the right seminal vesicle. The patient was submitted to a laparoscopic unilateral vesiculectomy. Histopathological analysis showed intraluminal dilatation with blood content. During follow-up, complete resolution of symptoms was seen.

Conclusions: Laparoscopic vesiculectomy is a safe and feasible approach in cases of hemospermia. This technique showed good outcomes and minimal morbidity. 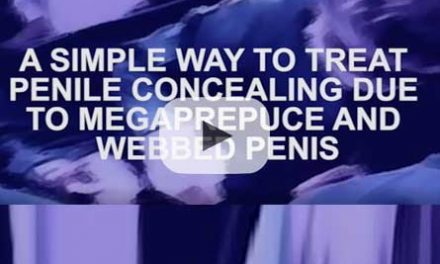 A simple way to treat penile concealing due to webbed penis 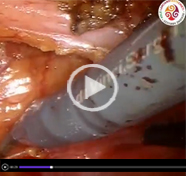